You are here: Main » Russian opposition leader Navalny's doctor says he 'could die at any moment'
by Wanda Ford - at April 18, 2021

Russian opposition leader Alexei Navalny "is dying" and could suffer a cardiac arrest at "any minute", his doctor warned today as medics are barred from the penal colony.

Russian Federation jailed Navalny for two-and-a-half years in February for parole violations he said were trumped up.

Navalny (44), a prominent opponent of Russian President Vladimir Putin, started refusing food on March 31 this year in protest at what he said was the refusal of prison authorities to treat him properly for acute back and leg pain.

Navalny's personal doctor Anastasia Vasilyeva and three more doctors including cardiologist Yaroslav Ashikhmin have asked prison officials to grant them immediate access. "His condition is indeed critical", said a representative of the Doctors Alliance trade union, a group that the Russian government considers an opposition organization.

He was arrested at the border as he returned to Russian Federation from Germany where he had been recovering from a nerve agent poisoning.

'Fatal arrhythmia can develop any minute'. 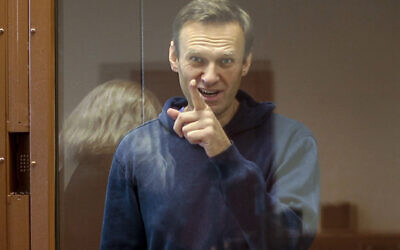 "If you don't give up the hunger strike, then we are ready to switch to force-feeding now", he quoted the unnamed prison administrator as saying to him.

During his recovery in Berlin, European experts and the global chemical weapons watchdog determined that Navalny was poisoned with Novichok, a Soviet-designed, military-grade nerve agent, in August 2020.

The medics said he had to be examined immediately "taking into account the blood tests and his recent poisoning".

Last week, Russian Foreign Ministry's spokeswoman, Maria Zakharova, said that the United States is making up "stories" about Navalny's detention conditions while the USA itself continues to violate the rights of prisoners.

His wife Yulia, who visited him earlier this week in prison, confirmed that he now weighs 76 kilograms, nine kilograms less than he was at the start of his hunger strike.

On Friday, Russian prosecutors asked a court to label Navalny's Anti-Corruption Foundation and the network of his regional offices "extremist" organisations in a move that would outlaw them in Russia and could result in jail time for their members.

Suga says Biden supports Tokyo Olympics but attendance uncertain
Biden and Suga on Friday are expected to announce steps through the Quad framework to help India produce COVID-19 vaccines. Japan long has moved cautiously on steps that might worsen relations with China, though Suga has been more outspoken.