The Egyptian mission under Zahi Hawass discovered an ancient Egyptian city in Luxor - The Rise of Aten - that was lost under the sands 3000 years ago.

"Many foreign missions searched for this city and never found it", Hawass said in a statement.

The 3,000-year-old city is believed to have been founded by 14th century BC pharaoh Amenhotep III and remained active throughout the reign of pharaoh Tutankhamun and his successor Ay.

The archaeologists also said that Betsy Bryan, Professor of Egyptian art and archaeology at Johns Hopkins University, hailed the find as the "second most important archeological discovery since the tomb of Tutankhamun".

Rings, scarabs, colored pottery vessels, and mud bricks bearing seals of King Amenhotep III's cartouche that were found during the discovery confirmed the dating of the city, Hawass added. However, within weeks they found mud brick formations that eventually turned out to be a well-preserved large city. "The city, built on the western bank of the Nile River, was once the largest administrative and industrial settlement of the pharaonic empire", added Haas, who's a former antiquities minister.

This team began excavations on the west bank of Luxor, about 300 miles south of Cairo, because the temples of both Horemheb and Ay were found nearby, the statement explains.

The Egyptian mission, that started working on the discovery in September 2020, has found a well-preserved city with nearly complete walls, and with rooms filled with tools of daily life.

After seven months of excavations and searching, the team unearthed the city and have so far found several neighborhoods, with 10 feet high walls that are still intact. "It was connected with the god Aton and Amenhotep III", famed Egyptologist Zahi Hawass enthusiastically told reporters today.

To the north of the city, the team discovered a large cemetery. 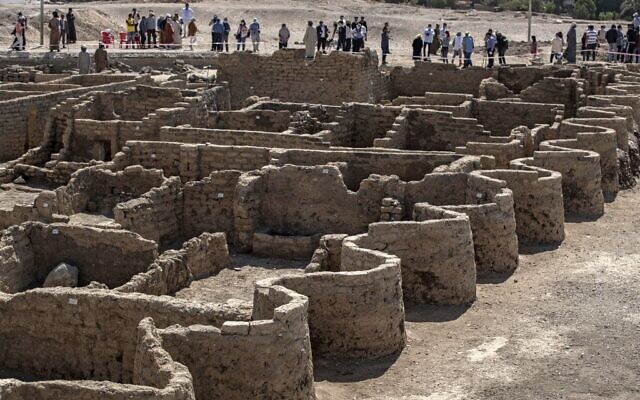 Hawass had announced earlier this week the discovery of a "lost golden city", and the archaeological team said the find was "the largest" ancient city ever uncovered in Egypt.

CBS News reports that archaeologists have unearthed the remains in the desert near Luxor, Egypt, where the Valley of the Kings is located. Also discovered, was the burial of a human being with arms stretched out to the side and the remains of a rope wrapped around the knees.

Egypt has sought publicity for its archaeological discoveries in the hopes of reviving its tourism sector, which was badly hit by the turmoil following the 2011 uprising, and now the coronavirus pandemic.

Bryan said the city "will give us a rare glimpse into the life of the ancient Egyptians at the time where the empire was at its wealthiest".

Only further excavations of the area will reveal what truly happened 3,500 years ago.

Tutankhamun's almost intact tomb was discovered in 1922 in the Valley of the Kings by British archaeologist Howard Carter.

Ukraine's Zelensky on frontline as Merkel urges Putin to pull back troops
Other than Russia, Ukraine also has serious political problems with Hungary, a North Atlantic Treaty Organisation member. But it was the first time that the Biden administration has given a description of the scale of the buildup.