Any precipitation will remain very light, and not everyone will see the activity.

They were also projecting a 30 percent chance of rain on Christmas Day, which could make for a bumpy return flight to the North Poll if Santa is running late dropping off presents.

Plentiful sunshine is expected on Sunday. Temperatures will stay steady in the low 40s or drop slowly for most until after dark. The unseasonal warmth will be short-lived and associated with a stronger storm system.

For the past week we've been talking about the potential for a small clipper storm to bring some light snowfall Christmas Eve.

Locally higher amounts up to 4 inches are possible where snow showers persist downwind of lakes Erie and Ontario for much of Christmas Eve. Not everyone will get in on this round of rain. We will see a wintery mix with ice transition to rain as we are expected to be on the warm side of a system moving towards West Michigan.

Moderate to heavy snow is expected to our north and west from western Kansas, Colorado, Nebraska, and into parts of Iowa, South Dakota, and Minnesota. 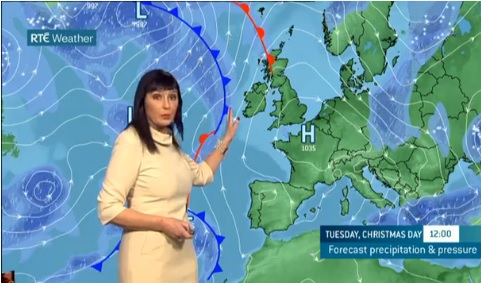 Parts of the Somerset Levels, which cover 160,000 acres, also flooded for the first time this year after the area was hit by a week's worth of rainfall in one day on Thursday.

Our chance for rain will begin to end by Thursday afternoon. Dry for the evening hours on Christmas Eve with temperatures in the low 20s.

Tonight: Mostly cloudy with a few sprinkles or flurries possible, then clearing skies late. Highs should still climb into the low to mid 40s.

Today will be cloudy and misty with some rain in the south-west and persistent rain over the northern half of the country in the morning, and more rain tonight.

But Ladbrokes have slashed their odds that Christmas Day will be the warmest ever by 5/1, instead of snowy.